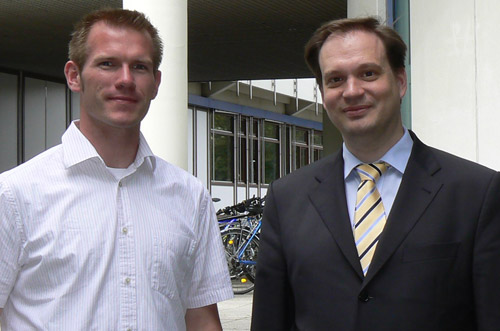 Germany is currently suffering from a lack of Informatics experts which – according to forecasts and despite the financial crisis – is set to intesify in the years to come. In the Technology Region Karlsruhe, IT plays a particularly important role. Thus, initiatives to motivate young people to seek jobs in IT or to study IT subjects should be of highest importance.

There are already some projects that focus on career orientation for pupils and future university students. Projects to be mentioned are the Pupil Programme which has also been introduced at other universities across Germany or BOGY, the career and degree orientation initiative for Gymnasien (grammar schools) that has been established by the State Institution for School Development and Partner Institutes.

In addition to personal contact with representatives from the IT world, an important part of these initiatives is hands-on experience with the "subject", followed by positive feedback. Many initiatives for career orientation already involve internships for the participants. While it is quite easy in most industries to assign some kind of work within a company to unexperienced young people having no previous knowledge, this is difficult to implement in the IT industry. Planning an internship where participants are to create something within just a few days is a difficult task for companies.

The proposed project addresses this problem: The focus of the project is on conceiving and designing an IT Experience Project which can be realised within a short period of time. In the course of this project, pupils and prospective students will on the one hand experience different aspects such as getting to know exciting new subject areas or collaborating with other colleagues. On the other hand, they should be able to look back on a finalised result at the end of the projects, during which they been able to create something new and of their own.

One topic for such an IT Experience Project for pupils in the age of the Internet is an introduction using devices for mobile data processing (such as navigation systems). It stresses the role IT nowadays plays in everyday life and demonstrates how IT can be used in our lives without necessarily using a computer.

In detail, creating a website in combination with mobile devices that can both make photos and store geographical information would be a feasible option. The free content management system Typo3, for example, can by used to show the participants how they can adjust it by simple means to communicate with colleagues. They could, for example, document their way to their internship company and describe it virtually: This could also be used specifically by the companies.